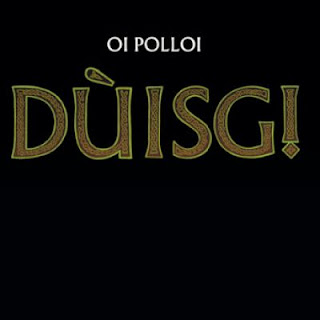 Compared to the Basque Country or even our Celtic cousins in Cymru, Scotland has a paucity of bands composing new material in her own language. Fortunately though, one of them is a well kent face on the international stage.

Dùisg is the second LP by Oi Polloi to be recorded entirely in Scottish/ Gàidhlig though the language has featured in various other recordings over the years, including a session for the BBC Alba program Rapal. The last one Ar Cànan, Ar Ceòl, Ar-a-mach broke some new ground for Polloi's mix of Sham 69/ Cockney Rejects type Oi! and Discharge-esque thrash. Added to that was some crunchy Killing Joke, bagpipes and traditional Gaelic song.

Dùisg continues in more or less the same vein but with the addition of keyboards here and there. It's probably their best yet - lots of catchy tunes, though some of them are delivered at a pretty hectic pace. Some great guitar hooks as well as some dark and brooding grinding hardcore. The Gaelic vocals as per usual are more the bastard son of Tom Waits and Pinhead from Hellraiser than Karen Matheson or Mànran.

Lyrics deal with some of the usual topics but also break new ground. Since when did you hear of a song promoting the use of LINUX? And, in Gaelic punk rock? Other issues dealt with in the Scottish tongue are police brutality (Dìon is Cuidich), increased state surveillance (Ar Dìleab) and the futility of capitalism (Dòigh Eile).


On top of that there's an essay on why Oi Polloi sing in Gaelic, a short story in Gaelic and an interview on alternative operating systems for computers. If you're lucky enough to purchase the album at a gig, you'll get a vinyl LP with A4 booklet, CD and patch all wrapped up in a reusable Oi Polloi shopping bag. Otherwise, contact them for a CD copy.


Is this another step forward for indigenous Scottish music? Possibly but at best we're treading water in terms of producing new and challenging contemporary music in Gaelic. We're miles behind the Basque Country. Let's hope that those agencies charged with developing Gaelic put more money into exciting cultural initiatives for young people instead of wasting it on ill-thought out projects like MyGaelic. How about song writing classes in rock music for teenage Gaelic medium kids instead of just learning auld tunes for the fiddle?

The only slight complaint that I'd have here is that English translations are included. We need more situations where English monoglots are forced to learn at least some Gaelic and where Gaels are not compelled to translate everything they say, sing or write into Her Majesty's tongue.