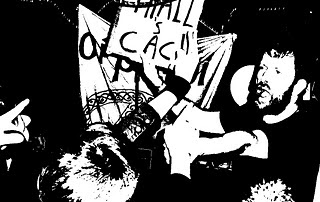 Some may argue that any punk band that has been together for 30 years isn't a punk band. Some like the UK Subs and GBH never went away. Others like the Pistols, Damned, Subhumans, Skids and even bizarrely Anti-Pasti have at some point reformed. However, I guess that if your music has 'ranged' from basic Oi! to tuneful Sham 69 type punk via the likes of hardcore metal and grunge with some fiddle and bagpipes thrown in then the band has always 'reinvented' itself. A bit like Madonna. 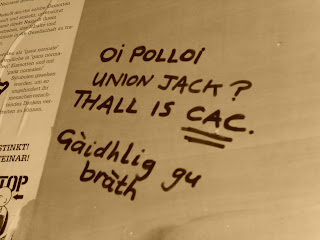 This is not achieved without a turnover in members. Polloi's members have included punks from the schemes as well as ex-pupils of private schools. Not surprisingly, political activists have been there in some number. Most notably were activists for the likes of Anti-Fascist Action and the Hunt Saboteurs. One was even outed as a BNP member which ended up being more painful for him than embarrassing for the band. Lyrics have been equally varied. Some of the early simple ones are still the best in terms of effect and audience reaction - the likes of Apostles cover Pigs for Slaughter, Americans Out/ Hands off Nicaragua and Let the Boots do the Talking. Even the later switch to singing in the medium of Gaelic hasn't deterred the punks from singing along to Carson? or Union Jack - Thall is Cac! Indeed, the funky Killing Joke-esque anthem for the Naked Rambler, Ramalair Ruisgte is so catchy that even Tocasaid's non-punk better half has shaken her tòn to it. Some songs like Meine Augen, THC and Sex with Strangers too much like Crucial Youth for my liking though.

The lyrics generally haven't shied away from their political stance. I remember seeing one - amusing - confrontation in a Dublin nightclub when some local non-fascist but very Roman Catholic skinheads objected to When Two Men Kiss. The pro-land rights song Take Back the Land is an excellent and angry piece of satire. Willie MacRae also goes where a lot of anarchists don't. Even the decision to record only in Gaelic a few years ago is a bold statement and embodies the spirit of the political philosopher who said that learning a minority language itself was a revolutionary act. Polloi have shown that indigenous struggles are just as important at home as in Mexico or Nicaragua. 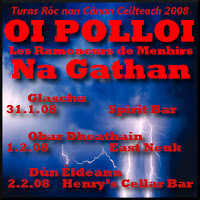 Learning languages has also bizarrely got Oi Polloi in trouble. In Germany, a rather strange anarchist subsect known as 'Anti-Deutsch' sees speaking German as 'making people proud of Germany' and therefore anti-semitic. In their eyes. As Polloi's singer Ruairidh is a fluent German speaker this has prompted threats from this small but irritating subsect of anarchist moonies. Singing in Gaelic was also not cool. However coming from 'punks' who voiced support for George W Bush in his 'war' against 'anti-semitism', I wouldn't worry too much about that.

Back in Alba a few years ago, similarly dour anarchist types - with accents that made Prince William seem like a prole - forced a film-crew from BBC Alba to flee the punk festival on Cramond Island. As the posh dirty ones explained between swigs of Sainsbury's cider, co-operating with the evil BBC, even in Gaelic, was a counter-revolutionary act. Oi Polloi were, simply... and I quote here, "the voice of the British state". The irony of an English anarchist berating a young Highlander, enthusiastic for new challenging Gaelic music, coming to film an anarchist punk rock band when only 3 decades previously Highlanders were punished by the 'British State' for speaking the same tongue was lost on these 'liberators'.

The tales are many and give credence to the statement that life is stranger than fiction. Some can be found in this interview on Viceland.

I look forward to the book. But until then, its time to get out the DMs and Sandanista Tshirts and get along to Bannermans for the anarchoi than never went away. 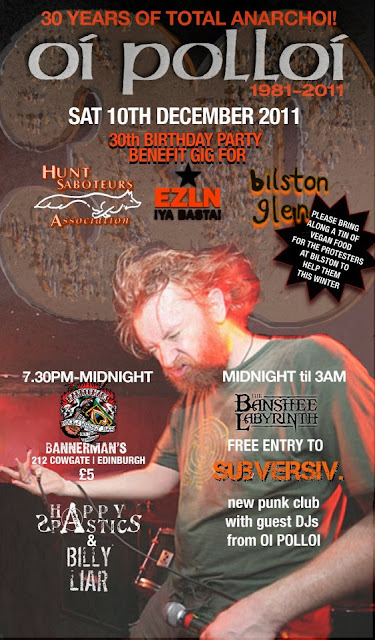