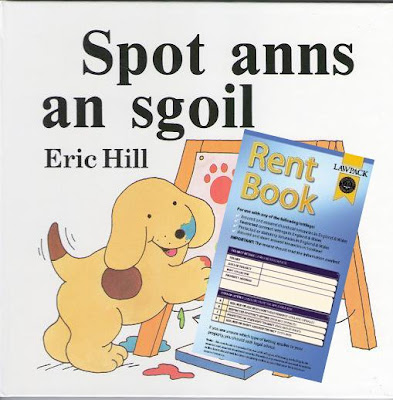 Award-winning current affairs series Eòrpa returns to our screens tonight on BBC Alba. Desptie Eorpa being produced by Gaelic-speaking Scots, friends from outwith the 'UK' have commented that its probably the most outward looking television they've seen here.
As well as its usual coverage of issues from the European continent, tonight it looks at the PFI disaster which New Labour bequeathed to our grandchildren. While New Labour couldn't get away with openly shunting all our health and education services into the private sector, it did at least make it the landlord for many new schools and hospitals. This means that some of our schools will be paying private business for many years to come. The final cost of these buildings to the taxpayer will be many times what the establishment in question cost to build. Eorpa though reveals that this is just part of the problem.
According to Eorpa:

PFI contracts have been the subject of controversy since they began to be used by the UK government in the 1990s. Public bodies paying private consortiums yearly to build and administer a new building for a certain number of years. Afterwards, the building is owned by the public sector. As Darren Laing reports though, Eòrpa has been given information that the land under and around some new PFI buildings is set to remain in private ownership for years after the initial building and running contract ends.

Not only are we indebted to private business for the next century, but in the here and now, these PFIs are making the every day running of schools more difficult than it should be. Should teachers or staff wish to decorate the school with children's work, then permission needs to be sought from the school 'business manager' first. After all, who would want blue-tac stains and thumb tacks ruining their precious cash cow? Even the local council has to seek permission to use the school and its grounds for publicity purposes.
A timely reminder of why conservatives and other slaves to big business - be they Labour, Tory or Lib Dem - cannot be trusted with public services.
Eorpa. Today on BBC Alba at 20.30.
Sgrìobhte leis MacNaBracha at 3:43 PM

It's the most overfunded, underwatched station. We'd be better off helping our Hindu speaking friends

Anon - have you got evidence of this? What are your benchmarks for 'overfunded' and 'underwatched'?

I'm not sure that I can 'prove' that BBC Alba is 'underfunded' and 'adequately' watched. But I do know that BBC Alba has a budget of £14 which as far as I know goes on radio and internet as well. BBC 4 has a budget of £53.4. Do we really need another English language channel? How many are there already on Freeview? The lastest reports since the channel came on Freeview suggest that it is actually very successful. Surely a channel that attracts 2 or 3 times its core audience (66000 Gaelic speakers) must be successful by any yardstick?

Or do I have my reasoning wrong?

Oh, good to hear that you're going to support the Hindi language in Scotland. What steps exactly are you gonna take?