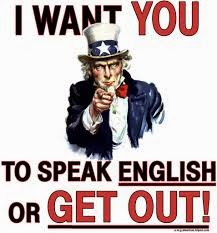 Incredible but true - punk band Oi Polloi have been banned from a 'culture centre' in Srausberg, part of the former DDR in Germany because.... they sing in Scottish!

To quote from the band:


Those of you who saw our last post will already know that we were yesterday "banned" from playing our forthcoming gig at the Horte "Kulturzentrum" in Strausberg in eastern Germany for the incredible reason that we sometimes sing in Gaelic, one of the UK's minority Celtic languages. When we were initially informed of this we thought that it had to be some kind of joke. Sadly this was not the case. What we first heard from our friend who was dealing with the Horte was -" the conzert is caceled... The reason is that some guys in the venue don't know about your gallisch songs ... I know a stupid reason. I'm so sorry" . He then forwarded a text from one of the concert crew which said "beim plenum heute gab eine grössere debatte zwekk des gallischem wa sie singen.... die band leider nicht spielen kann..." or, in English, roughly, "At the meeting today there was a big debate with regards to them singing in Gaelic" and, when our friend asked what that meant, the reply was "that the band can't play". In the online discussion that followed our announcement about this some suggested that this surely couldn't be the real reason but today we were contacted directly by someone from the venue who is involved in organising concerts there and who stressed that he personally didn't agree with the decision but confirmed that the ban was a result of our singing in Gaelic. "With us was discussed about it and there were a few people in the house that simply could not understand why your . Sing songs in the language I personally tried to do everything .... but there was still bedencken of people in the house. The mind rested more on that you just do not understand why you use this language." Well, we use this language because we believe in respect for minority cultures and their linguistic human rights, we believe in diversity and multiculturalism and we stand in total opposition to discrimination against minorities. If you've got a problem with that then it's probably for the best that we don't play in your so-called "culture centre". Needless to say we're in the midst of trying to organise an alternative gig right now - many thanks to all those who have offered help with this. We reiterate that there can be no place for racism or discrimination against minorities in our scene. For diversity, multiculturalism, respect for minorities and a punk scene free of discrimination!

The reasons behind the Horte Soziales Zentrum's aversion to a minority language from another nation are not immediately apparent. One reason maybe that they are racist. Incredibly, there are publicly funded 'youth' centres in Germany that do apparently cater for 'right-wing youth'. Another reason is that the po-faced automatons on the 'plenum/ committee' that polices the centre's events for linguistic purity may actually be far-left loonies. There is a so-called 'Anti-Deutsch' movement that has previously taken issue with Oi Polloi on account that they sing in different languages - principally Scottish and English but also in Finnish and German. It would appear that speaking Scottish Gaelic is 'too nationalist' and speaking German will 'make young Germans proud to be German'. Either they see a movement that forces an English language monoculture on everyone as liberating and in sync with their extreme anarchist/ communist agenda or they believe rock bands shouldn't sing at all.

Either way, the discontent at the plenum's ludicrous bit of discrimination has grown wings with Oi Polloi and others spreading news of it far and wide. Horte has an handy online contact form here. 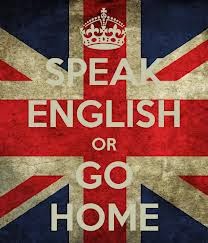 Despite the po-faced derision of some who think that solidarity between 'minority' groups is Not Cool, I see it as entirely pertinent to ask, 'Would they cancel a concert by a foreign band who sang in...Basque/ Corsican/ Sorbish/ Sami or one of the plethora of Asian or African languages?'.

Whatever, if they really wish to combat 'nationalism' by expecting the diverse strands of human culture to conform to one Anglo-American linguistic worldview then they should expect to be reminded of the last guy who attempted such a 'solution'.

French politician Jean-Luc Mélenchon, darling of the alternative Engli...I mean British left is also well known for his hostility towards Frances minority languages. One to keep an eye on. He is a populist who wants to appeal to the mass of monoligual working class French, tempted to vote for Le Pen, who perhaps are just a little resentful of those who can speak other languages. He is appealing to French nationlism by picking on a minorities but he has chosen minorities that are invisible and therefore open game. Clever really.