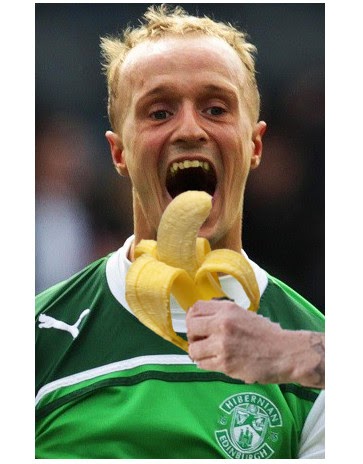 When racism rears its head in football, some racists are more equal than others. If you're a first team regular for Glasgow Celtic and a Hibernian fan who's been filmed in a bar mocking another player as a 'fucking refugee' on account of his east European origin then there's some wiggle room.

It's good to see footballing professionals throughout Europe take a stand against racism and in solidarity with Dani Alves. Leigh Griffiths has a track record of racist and homophobic abuse. His clubs, Hibernian and Celtic, should know better. Some excuse him on grounds of his working class origin and alleged low IQ. The same charges could be levelled at much of the BNP or EDL membership and no sane person tolerates them.
Sgrìobhte leis MacNaBracha at 11:12 PM