The new Scottish dictionary - some suggestions... 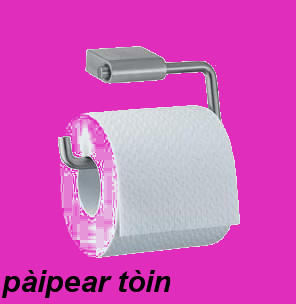 It is good news that £2million has been promised to the project which will create a new and comprehensive Scottish/ Gàidhlig dictionary. Tocasaid is pleased to offer a few more contributions for the corpus. The sources of these terms cannot be identified - though some were coined air ball out of necessity - but the powers-that-be in the Gaelic community can sleep soundly at night in the knowledge that they are used and understood in at least one household.

Being Scots, it is a given that some whinge about the new dictionary. Even within the Gàidhlig community there are some who think that having a body of academics or professionals (the 'Gaelic establishment') - who are charged with serving speakers of the Scottish tongue or developing it - is A Very Bad Thing. Some think that the money would be better spent on Other Things. 'Hurrah' say the Daily Mail and sinister Tax Payers' Alliance to that.

As if we don't deserve both. Taigh a' Chac to those who think Scots should continue to scrabble for the crumbs that fall from the table. We've been passive for too long and basically need to grow some.

And so, onto the Tocasaid pictorial corpus of household Gàidhlig for the modern era, in no particular order...