Marriage and scrota. Royal or otherwise. 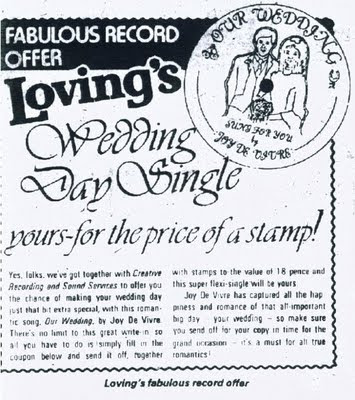 The forthcoming 'royal' marriage between an Anglo-Germanic prince and his chosen receptacle for the royal seed has the worrying possibility of giving renewed credence to two equally outdated institutions. Those are the 'British' royal family and marriage. Marriage though as we know it appears to be dying despite a blip in Scotland last year when the numbers were up slightly from the previous year's all-time low. The fact remains though that most relationships break up. Why then try and contain human sexual relations within a narrow Judeo-Christian box that is increasingly a coffin for true natural feelings?
In a Western European context, the 'institution' of marriage continues to be shored up through the twin evils of religion and authoritarianism. Religion at least seems to be dying too. Perhaps 'dying' is too strong a verb as there will always be a significant minority who either believe in a god or want to get hitched in whatever way god or state decides. It is however a cause of celebration that both these institutions seem to be withering away to their 'irreducable core'.
Those who do not or cannot marry are still hindered by the archane laws of many countries in Europe. One example is that of the late Stieg Larsson, author of the Millennium Trilogy. He died at the age of 50 in 2004. However,the law in his native Sweden refuses to acknowledge the 32 year co-habitation between Larsson and his partner as legitimate and decrees that his estate should go to his blood relatives.
Germany too creates difficulties for those not married, even when one of the partners and their child are born abroad. Should an unmarried German mother attempt to take her Scottish born baby into Germany there could be problems if the baby carries a different name to her mother. Should they wish to enter Germany via an airport, the customs and excise guards could refuse entry and fine the mother 2000 Euros. Should the mother drive or walk across the border from the Netherlands, France, Poland or Denmark then this isn't an issue.
Civil partnerships may be a step in the right direction. However, should the love or co-habitation between two people of any gender have to be 'recognised' by the state? The word 'marry' simply means 'to unite' or 'to come together' and this was the way it was for most of human history. Monogamy too has not always been an issue though in almost all cultures it's usually been the men who have enjoyed various partners. Even early Christians were not as hung up on a formal ceremony and recognition of marriage as their modern equivalents are. For the early Christians, the intention to live together was signal enough of the love between two people.
The philosopher AC Grayling in his book Life, Sex and Ideas - The Good Life Without God states:

The roots of socio-legal marriage lie in a profoundly sexist financial arrangement. Its originating aim was to constrain women's sexuality and fertility so that men could be sure they were bequeathing their property to their own offspring. When the poorer classes also began to acquire property... various marriage traditions were at last reduced by law to a single type.

Control of sex is what it comes down to. Rich men wanted to make it illegal for another man to 'shag their burd'. And if the law failed then at least the groundwork was done to deny the fruit of another man's loins wealth that it didn't deserve. As with modern drug control though, the law and religious morality failed and continues to do so. Hence, what is natural becomes illegal. Grayling goes on to offer the following quotes:

Christianity gave Eros poison to drink but he did not die of it. He degenerated - into vice. Nietzsche.

As with the old definition of 'marriage' having being corrupted, so too is 'monogamy'. Monogamy originally meant one partner for life.  Aye right. The fact is though that should you be lucky enough to marry the person with which you spend your remaining decades of life, it is highly unlikely that it will be your first sexual partner. Equally, despite all the fuss, money and continuing morality surrounding marriage, around half of them break up. If this isn't reason enough to give it a miss, why not look to biology. According to Dutch biologist Midas Dekkers, the inclination of a species to play around can be gauged by the size of the scrotum:

The greater the chances of unfaithfulness , the greater the sperm production will have to be.  Within a single group of animals the degree of infidelity from species to species can be determined by the size of the scrota.

We apparently, on the scrotal swingometer, are somewhere in the middle between the chimp and the gorilla with a slight inclination towards gorilla-style fidelity. Infidelity remains a popular habit for married couples though. What will Prince William be? A chimp, gorilla or maybe a bonobo? Certainly, his family have no claim to the moral high ground of family values in a married Christian context. His wee brother Harry is a carbon copy of the 'lecherous cad' James Hewitt. His father Chas allegedly had 'liaisons' with a male servant and enjoyed adulterous relations - "I want to be your tampon" - with horse-faced Camilla while still married to Saint Di.

Interestingly the word 'infidelity' originally meant a 'want of faith, unbelief in religion'. Polly Vernon in the Guardian states that up to 40% of people in marriages or long-term relationships will be 'unfaithful' at some point. Again though, our obsession with sins of the flesh should have no place in a modern progressive society. Partners can be ill-treated in many ways. Why then should a sexual liaison with another person be worse than sitting in front of a computer growing a beer belly while 'the wife' does the washing-up?

In the progressive Scandinavian nations, religion and marriage are becoming increasingly sidelined. In Norway and Sweden, the majority of kids are now born outside of marriage. This has caused some consternation amongst Catholics, still reeling from the Pope's condom U-turn who fear a loss of control.

Marriage remains an outdated and usually expensive millstone around our necks. In Europe it is promoted by a Judeo-Christian philosophy that expects us to circumcise our sons or sees unmarried elderly bachelors sermonise us on family values. It is a unnecessary capitulation to authoritarianism and backward religious 'morals'. MPs and priests, churches and registry offices can no more express the diversity and unpredictability of human love than can Loving magazine or a comic strip from The Sun. On April 29th, I'll celebrate the likely demise of the forthcoming royal marriage and hopefully of both 'institutions'.

Midas Dekkers, The Way of All Flesh - A Celebration of Decay

AC Grayling, Life, Sex and Ideas - The Good Life Without God
Update:
That lone voice of reason, the Daily Mail today reports with horror that... 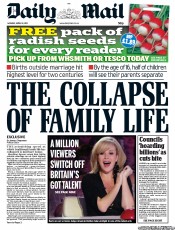 The astonishing speed at which traditional family life has collapsed is laid bare today.
Shocking figures reveal that births outside marriage are at their highest level in two centuries and nearly half of children can expect their parents to separate by the time they turn 16.
Nine out of ten couples now live together before – or instead of – tying the knot. Before the Second World War, it was fewer than one in 30.

I am indeed shocked. Its the first good news that I've read in the Mail, ever.

What has this got to do with Scottish independence or the Gaelic language? Maybe you should have separate blogs for your Scottish/Gaelic stuff on one hand, and your atheist social commentary on the other. All the Gaels in my family are devout Christians.

The strength of any society lies in its religion and maintaining strong family values. Without those two pillars a society is dysfunctional.

And whats with all the Atheist fundamentalist links? There are plenty of atheist blogs and websites out there, I don't think Richard Dawkins your help, all it does is distract you and others from putting Scotland first. Maybe you should be a bit more open minded and read scientists like Francis Collins, Simon Conway-Morris and Alistair McGrath.

Do you come from a Wee Free background? Do you feel oppressed or something? Is that what it is? Most Christians aren't Fundamentalists you know.

Liked reading your comments. Shame you think my blog is pigeonholed into 'Scots independence', 'Gaelic' or 'atheist'. Its all of these and none - you'll also find posts on whisky, punk rock, philosophy and nuclear power.

I wonder if you could posit some evidence on your 'religion and family values are the strength of society' claim? Does that mean that Taleban-controlled Afghanistan or Saudi Arabia are 'strong'? And is the definition of 'strength' a fascistic society that terrorises its people into following ancient mumbo-jumbo?

Here's a quote from the Legatum Prosperity Index (read it - its very interesting) regarding Norway which is widely considered to be the most prosperous and happy nation on earth:
An unparalleled 74%* of Norwegians report that other people can be trusted, the highest such rate in the world. In a 2008 survey, a high 43%* of people had donated money within the previous month, and a very high 38%* of people had volunteered. The 46%* of people who had helped a stranger in the same time period is also above the global average. Nearly 94%* of Norwegians say that they have someone they can rely on in times of need. This strong social support is present despite potentially low access to familial and religious support networks: marriage rates are below the global average, at 52%*, and reported religious attendance is just 13%*, the second lowest rate in the world.

Sure, I believe that an independent Scotland is best for her people. But, it has to leave the past behind. A large part of that past is religious fanaticism - be it Knox, the witch burnings, the hardliners who gained control of Lewis 200 years ago, the might of the Catholic Church and of course the mixed football-religious tribalism that shames our national sport.

Its also arguable that Scotland was its most dysfunctional when in the grip of one religion or another. One could look at the many cover-ups of child abuse in the Catholic Church or to the anti-Irish racism of the Kirk here in the 30s. Even today, churches seem more preoccupied with 'sins of the flesh' than they do with the sin of poverty.

Aye, I grew up in a typical Scots Presbyterian house. The teachers at my local primary were Christians and... monsters.

Religion is the curse of the Gaidhealtachd. Fortunately it is being left behind. I could equally point to many of Gaeldom's most notable artists - Somhairle MacGill-Eathain, Iain Crichton Smith, Domhnall MacAmhlaigh, Aonghas MacNeacail and of course the very contemporary Niseach, (Dr)Fionnlagh MacLeoid who has long campaigned against the dour religion that has gripped his island for the past two centuries.

People are of course free to worship whatever they please. But, it makes my blood boil when it is forced into children's heads in state schools. If your faith and god is so strong, leave the brainwashing until they're old enough to think for themselves.

How do you say bravo in Gaelic?
Mac an t-Srònaich, you deserve it.