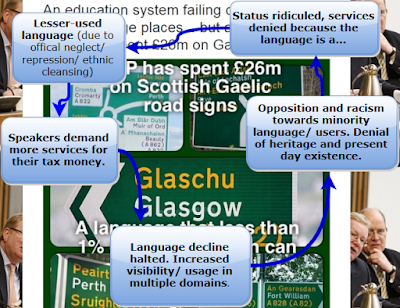 Or to be more exact, it's a hatred of something that's not understood. Ignorance, in a word. While Stuart Campbell may bleat about feeling like an 'alien in his own land' due to other people using a language he doesn't know and may question the role of an 'ancient' language in modern society - he sounds more like the dark-age peasant who fears the forest and darkness due to not having the wherewithal to shine a light.

Let's be clear, no-one is forcing the Rev Caimbeul to light a torch instead of cursing the darkness but surely it isn't too much to ask for those us who possess two (or more) torches to live without ridicule. To stretch this metaphor further, our taxes go to support the supply of batteries for our big torch (some may say an 'alien' Anglo-Saxon torch) so surely some cells for the wee torch must also be provided?

And, if we aren't fighting for a progressive and just Scotland that can stand on her own two feet without fear of being derided as 'too wee and too stupid' then frankly, it's not gonna be fuckin worth it.

And if the Rev Caimbeul - ironic, eh? - isn't deriding the language of the Scots, or her speakers, as 'too wee, too stupid' then what the France is he doing?

This seems to be the sum of his logic:


spoken by a minority = obsolete, no-one speaks it
Gaelic is ancient = so is witch burning, castles, mountains, fossils (is this actually an argument?)
Gaels are bilingual = force them to speak English then (and the Danes and Dutch too?)
I don't understand it = bad
it's the indigenous tongue of the Scots = Nazi blood and soil stuff


This is the vicious cycle of Scottish bilingualism: Speak it = don't force your elitist language on me. Don't speak it = it's a dead language, no-one speaks it.

Jackson Carlaw, who kicked off this stooshie, is one huge balloon of a man. If the usually sharp and well-researched Stiùbhart Caimbeul - he does make several good points in the latter half of his posting - can't hit a closach this size with his darts without nailing Scotland's Gaelic speakers then maybe his is a bubble that's burst.


Someone mentioned that the worst enemies of Scottish are Scots themselves hence why people with Gaelic names like Caimbeul often seem to revel in their ignorance and celebrate their kicking of the wee guy. This would seem to be the case. And that begs the question, how will we ever gain our independence if we're trying to stagger forward under the burden of yon massive chip on our shoulder - that self-loathing grudge known as the Scottish Cringe.

Elvis Costello - the Sionnach Fionn here -  sang about 'one less white nigger'. Are we still, to use a another crude term, still just 'porridge wogs'? Carlaw and Caimbeul think so.

I mean to say and if you pardon my French - otherwise useless to me despite two years of it in school - what the fuck? If a modern Scotland can not encompass diversity and bilingualism then it deserves to be forever the lackey of Westminster and the runt of the Union, being laughed at by the rich, the idle and the debauched in the House of Lords. Would an independent Scotland only care for the poor in the Mother Theresa style - speak the right tongue in the right way and I may help you?

As to Jacksy Carlaw - he's the loose cannon of the Tories. What kind of ersepiece would lift a crude and erroneous image and statement from a group of right-wing EDL-types known as 'Smash the SNP'? I trust that Ruth Davidson is taking action? Or do only those 'vile CyberNats' warrant our disdain?

Lastly,  some biographical and other points.

Scottish Gaels have worked for and paid taxes to the Scottish/ British state for centuries. From Bannockburn to Dunkirk, they have been the backbone of 'our' many armies on the frontline. They received neither reward nor recognition for this and indeed were punished and repressed until modern times. During the Clearances, Gaelic was good enough to entice Scottish speakers into the army and to warn them of the consequences of trying to reclaim their own land. This, while it was beaten out of their kids at school.


As to myself, I am half-immigrant and my children are half-immigrant. My grandparents and great-grandparents were immigrants and emigrants due to poverty and famine in the Ireland and Scotland of their time. If this is 'blood and soil' nationalism then which blood, which soil? I thought the Nazis only wanted 'ein Spraeche, ein Volk'?  My children speak three languages - two of which are 'useful' should they wish to communicate with millions of others. Their Scottish tongue is also useful - not for the millions, who says big numbers only matter - for day to day conversation in their home, for decoding their local and ancient placenames in the Lowlands (is knowledge of the past/ present a bad thing?) and for enjoying the modern cultural output we can now enjoy in our Scottish tongue - from dad's Oi Polloi CDs to BBC Alba to Dotaman to Peppa Muc to Tormod Caimbeul to the film Seachd.

The talk of Carlaw and Caimbeul is almost fighting talk and it's clear that neither frequent local Scottish hostelries very much - goading and ridicule of this sort in sometimes met with a response that's not as polite as that of Gaelic speakers.

Maybe that's what we need to do more. Fight.

One of the most positive aspects of the pro-independence campaign was the prominence of strong, Bolshy, outspoken women. Why should 51% of the population continue - in the year 2015 FFS! - to be silenced or subjugated? Scottish Gaels may be less than 2% but that won't improve unless we become as crabbit and impolite as the Basque speakers, the Welsh speakers and  the Maoris.

This line from the Rev in particular is baffling: '...to the vast majority of the population, who are made to feel like uncultured aliens in their own land...'

If there are people out there who feel like this, that a language spoken by this '0.9%' has that effect, then they really ought to think long and hard about where this attitude comes from. It's incredible to think that a couple of Gaelic words could have that effect. So much for tolerance. I remember seeing a post from Scottish Police on Facebook, in the Gaelic, something about "Happy Holidays" or to that effect, and immediately came the snarky replies: "Well I live in the highlands and I don't speak Gaelic, so why are you discriminating against me?" And of course, if they had only waited 60 seconds, they would have seen the English translation being posted, as these things always are. Incredible. Behold the oppressed ultra-majority.

Not everyone who doesn't agree with your point of view is right wing, a fascist, a bigot or full of hatred or any other overused term we hear today. Sometimes people just have a different opinion. Why do some people feel the need to bully in order to get their own way? Your attitude is sadly rather typical of a section of society which is permanentlt agrieved about one thing or another. Can you make a point without sounding angry and calling people names I wonder. Grow up!

Comment visible after approval, ha. Should have guessed you'd only accept comments which meet your approval. Echo chamber preferred I guess.

Hi Anon,
You need to be patient. In case you hadn't noticed, posts on this blog are few and far between at the moment. Plus there are other reasons for moderating comments other than 'disagreement'.

As to bullying and bigotry - I don't need you learn/ speak Gaelic. That's your choice and therefore I don't mind your disagreement/ different choice. I do however have little or no tolerance for those who oppose diversity and the rights of others. Who's the bully - the person demanding rights for his/ her tongue and culture or the person who mocks it and denies those rights?

Anyway, sorry you sound so, er, aggrieved and angry. Have a dram.

¨spoken by a minority¨
Depends how you define the group. In the world as a whole English may well be a minority language. In a household or gathering of five, if three speak Gàidhlig then it´s the majority language. I.e. it´s all relative.
The real question here is whether enough people speak/write G. often enough for it to be sustained and developed as a viable continuing everyday medium of discourse. I´d say ´yes´, but it was a close call.


¨Gaelic is ancient¨
A language that has been passed down the generations is bound to be ´ancient´, the alternative is a ´made-up´ language like Tolkien´s Elvish langs. or possibly some contact languages etc.
Again, the real question lurking here is whether G. has adapted and continues to adept to the changing needs of its speakers as opposed to being ´stuck in the past´. Again, I´d say ´yes´, but it had a close call.

¨Gaels are bilingual¨
´S math sin, nach e? He is simply stating that he envies their linguistic superiority.

¨I don't understand it¨
Nach truagh sin? Implying he somehow thinks it important but is unwilling to learn ... out of some kind of false pride? Highland cringe? Mi-rùn mór nan Gall internalised?

¨it's the indigenous tongue of the Scots¨
No more or less than Inglis. Both arrived at around the same time, and anyway go back far enough and ¨Everybody came from somewhere else¨.