No taxi for Nigel 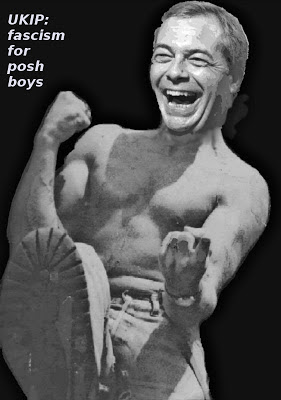 Sometimes, living in Edinburgh, you kind of get used to living in the glow of history. Famous residents from Hume to Donnchadh Bàn. Superb architecture. A history of multiculturalism stretching back 2000 years and more - of Picts, Britons, Gaels, Angles, French, Italians, Flemish, Poles and many more.

And then... one of the most odious  - 'charismatic' to the right-wing English press - figures to have slithered into the garden of English politics for many a long year, dares to come north.

A new pride is born, as this total cnt and charlatan, is sent packing by an angry crowd.


Farage was first forced out of the Canon's Gait pub on the Royal Mile after the landlord took fright as the demonstrators disrupted his casual press conference with shouts of "racist", "scum" and "homophobe". Out on the street, as the fingers pointed and taunts escalated, he was rejected by one taxi and turfed out of a second.

Then, finally, the harassed and ill-prepared handful of officers were forced to push him back into the Canon's Gait, slamming its front doors shut, as the demonstrators chanted: "Nigel, you're a bawbag, Nigel you're a bawbag, na, na, na, hey!" with gusto.

He's a millionaire businessmen, no doubt with financial interests across the globe. But he's anti-immigration.

Immigrants shouldn't 'take' our jobs but neither should they have benefits.

He's pro-strip-club but anti-gay. Hell, even the Tories for the most part have got over their anti-gay chip on their shoulder.

He wants 'independence' for the UK/England but thinks that Scotland's rather tame devolved parliament should be disbanded.

He's the dahling boy of the Daily Mail, who they hope will reach places that Mosely didn't.

And like so many before him, he's man with the posh accent who pulls the strings that make the bootboys dance. Worse, he pulls the heartstrings of misty-eyed Little Englanders who hanker for a past that never was.

Send him home to think again.