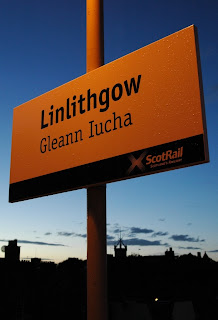 Reversing attitudes can be as difficult as reversing language shift. But I fully subscribe to the idea that sees a little progress as better than none at all. Better that than metaphors of rain wearing down mountains over millennia. The corrosive power of rain is a fact but is of no use when talking about a minority language struggling against institutionalised ignorance to reverse centuries of repression and decline.

Therefore, the erection of bilingual English-Gaelic signs at Linlithgow railway station is a battle won in the war against the erections who parade their ignorance and bigotry in the pages of the Daily Mail and readers' comments of the Scotsman.

Some may say that 'Gaelic has no history' in Linlithgow but cannot offer proof of their assertion. Whether or not Gaelic was the 'dominant' language of the entire Scottish mainland is difficult to prove or disprove. What is certain though is that Gaelic speaking populations - be they kings, lairds, monks, migrant farmers or just land working peasants - have left their mark in the form of many placenames all over the Lothians.


Furthermore, as Scots, Gaelic is an inseparable part of our nation's fabric. Our national iconography is almost entirely Gaelic in origin - think of whisky and tartan (it should be noted that the Victorians only adapted an ancient design), the bagpipes, Wallace and Bruce ( who also commanded Gaelic speaking armies whose 'sluagh-ghairm' was 'Albannaich'), the clàrsach, shinty, our personal names from Douglas in the Borders to Mackay in the North and of course our placenames.

Is there any corner of Scotland that does not have a ben, glen, drum, loch, corrie, bal, dun, knock, kyle, strath, camus, inch, ard, auch, ault or craig?

Historical presence is only one reason though for bilingual signs - English is not the 'native' language of most of the world but it can be found in almost every airport. The 'usefulness' of a written or spoken language can be measured in many ways. I'd argue that for every passenger that notices the Gaelic sign and realises that this area has another identity other than 'British' (in the modern sense) the value of these signs increases. Even more so if they then go and research it all.

Even without that value, I'd argue that the handful of taxpaying Gaelic speaking locals are entitled to see their, and Scotland's, mother tongue displayed next to the English wherever possible and practical. After all, for centuries Gaelic speakers received nothing in return for their tax money other than the right to enlist as cannon fodder for the British Army and to have their children beaten for speaking their home and community tongue. Strangely though, Gaelic was found to be very useful when attracting Gaels to the Highland regiments that fought on the front-line of London's many global conflicts.

Meanwhile, I'll continue to use spoken Gaelic whenever possible. I'll get my window on the world's current affairs from BBC Alba, Radio nan Gaidheal and Eorpa. I'll browse with Firefox in Gaelic and surf with Google in the same tongue. My address will read Dùn Eideann instead of Edinburgh. My kids will go to the local Gaelic unit/ school and read Tormod a' Bhocsair's output alongside JK Rowlings. The linguistic melange that is global English is not under threat. My actions add to my knowledge of my environment and therefore enhance my life. More than selfish gain though, it's another stane in the dyke along with the others that are placed there by those who seek to protect the earth's biocultural diversity.

* Iain Mac an Tailleir's 5-part collection of Scottish placenames can be downloaded, along with many other language resources/ goireasan cànain by clicking here.

Good to see these signs. Lets see more of them!

I am from the continent and I had never heard of Scottish Gaelic or of any Celtic languages until I arrived at Edinburgh Airport when I was 10; there I saw "Fàilte gu Alba" for the first time. I was very confused and wrote the sentence into my diary. At the end of the holidays, I had a whole list of such strange words I couldn't understand, and I even bought a tiny Scottish Gaelic-English and Scots-English dictionary. Today, I am on an exchange semester at the University of Aberdeen, learning Gaelic. Without such signs I probably still wouldn't even know of the existence of Scottish Gaelic.

evening Gaelic classes in Glasgow are full of non Scots, along with Scots. If you look here, for example http://www.hie.co.uk/about-hie/news-and-media/archive/research-reveals-value-of-gaelic-to-businesses-and-communities-in-scotland.html, it shows that economically (if people don't care about the cultural aspect) its not bad business to invest in.

Then there's the huge success of the Gaelic schools. I plan to send my son (if he can get in!). Sadly growing up in the 1980s I didn't get the chance to learn Gaelic that my Great Grandmother (and presumably other ancestors) spoke. Even if I had no genetic connection, I'd still understand the value.