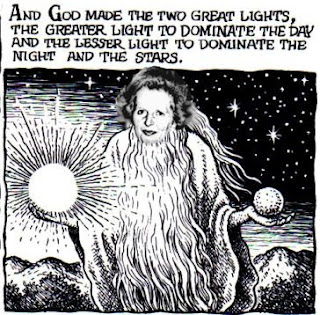 It's the great dark winter of austerity but Michael Gove, the testicular-faced education Caesar south of the border has found enough pennies in his sporan to send a new copy of the King James' Bible to every school in Engerland. Not only that, but this new edition will be prefaced by the Book of Gove.

Will the hitherto undiscovered Book of Gove be Old or New Testament in its leaning? Will kids be introduced to the vengeful, jealous and totally psychotic tyrant of the OT - the one who sends firestorms to engulf His creation and who has a bee in his bonnet about foreskins? Or will kids be given a hypocritical taste of the nice god - via his son, who is also er... himself... - who wants us to turn the other cheek except when marching into oil-rich nations to free their fossil-fuels for our use? Or will it be a kind of religious 'nice cop, nasty cop'?

There are some parallels to be drawn between the bipolar god of the bible and some Western politicians. In the bible, god creates people, draws up the parameters of their existence, insists they give him 'praise' for him choosing to create them and then melts them in fire if they don't toe his line. Equally, we have seen a number of tyrants 'created' by US and UK powers for decades now, usually for our short-term economic gain. However, like earthly sinners, they too face firestorms when they stop tugging their forelocks in the White House's direction.

Will this mass of contradictions be explained to England's schoolkids? I fear it may be left to a few 'rogue' teachers to balance things with the works of AC Grayling, Dawkins and the late Christopher Hitchens. Hitchens has many a tome which could easily be distilled and offered for consideration by young minds. Especially at this time of year when the sheer amount of bullshit forced upon kids in the name of 'Christmas' is staggering. Lets hope some of the content of Hitchens' The Portable Atheist or God is not Great is provided a.s.a.p.

Here's some of Hitchens' finest quotes on the subject:


“[Mother Teresa] was not a friend of the poor. She was a friend of poverty. She said that suffering was a gift from God. She spent her life opposing the only known cure for poverty, which is the empowerment of women and the emancipation of them from a livestock version of compulsory reproduction.”

“The Bible may, indeed does, contain a warrant for trafficking in humans, for ethnic cleansing, for slavery, for bride-price, and for indiscriminate massacre, but we are not bound by any of it because it was put together by crude, uncultured human mammals.”

“To terrify children with the image of hell, to consider women an inferior creation—is that good for the world?”

“Organised religion is violent, irrational, intolerant, allied to racism, tribalism, and bigotry, invested in ignorance and hostile to free inquiry, contemptuous of women and coercive toward children.”

“Everything about Christianity is contained in the pathetic image of 'the flock.”

“Who are your favorite heroines in real life? The women of Afghanistan, Iraq, and Iran who risk their lives and their beauty to defy the foulness of theocracy. Ayaan Hirsi Ali and Azar Nafisi as their ideal feminine model.”

I may use the term 'Winterval' to take the piss. There are those who are furious that anyone uses it. Instead, we are meant to accept our kids being brainwashed by fantasy and nonsense that isn't even in the Bible. The 'Good Book' is ludicrous enough with its mass of contradictions, hate and general mania. Even this book, on which our religious are based, does not make any mention of Christ's birthdate. Neither are there any wise men nor a star to follow. As Dawkins said of Catholicism, 'these guys are shamelessly making it up as they go along'.

The Wee Frees - Scotland's Real Proddies Continuing - are right in at least one thing. Christmas is simply an auld pagan festival that's been remixed over the centuries by the Pope and his closest men.

This leads me onto to Scotland's form of sectarianism which is actually pretty mild compared to the crazy form they practise in Iraq or Israel. To be precise, I wonder how the Orange Order and thousands of Glasgow Rangers' fans can continue to partake in such pagan and Popish idolatry? The Scotland of my maw's day all worked at Xmas. A friend of mine whose Irish mother grew up in a West Lothian town some 60 years ago tells me that hers was the only house with a Xmas tree in it.

This then is the peculiar thing about Scotland's sectarianism. On one hand you have thousands of... braindoners to be frank who hate Catholicism but who break the Sabbath by playing/ watching football, partake in Catholic/ pagan festivals and who don't really go to church anymore. Yet they still think they are 'oppressed' by the Pope.

On the other side, you have thousands of deluded Celtic fans who were born in Scotland often to Scots born parents, who speak Scottish and are culturally Scottish but who claim to be 'Irish'. I've met these 'second generation' Glaswegian Irish in the Gweedore Gaeltachd and they stick out like sare thumbs. You can meet the young lads speaking Irish and carrying hurley sticks or going to a session in a local teach before encountering swaggering loud Glaswegians with Celtic tops and gold chains. Now, who are the real Irish?